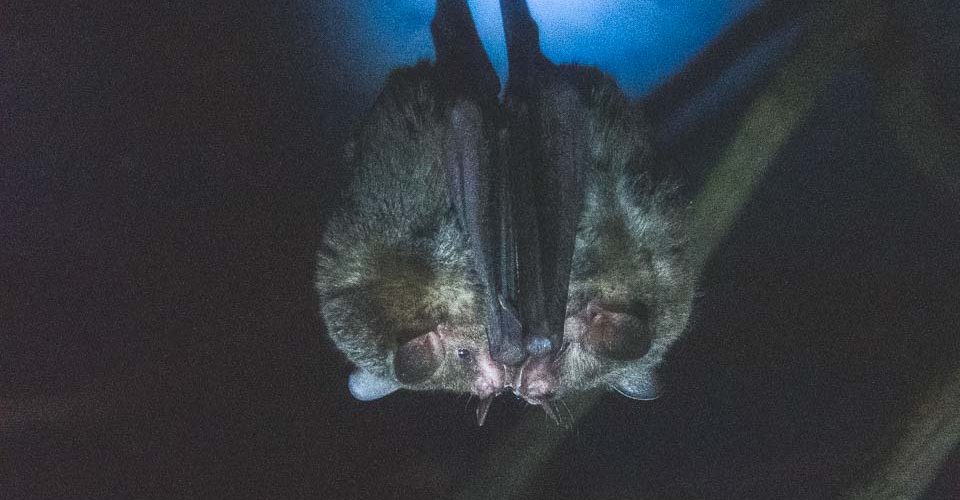 That is the magic of the Bat Jungle in Santa Elena, Costa Rica.

The Bat Jungle exhibit is located in the Montverde area of Costa Rica about 1/2 mile before you arrive at the Curi-Cancha Reserve on route 620.

If you are staying in Santa Elena, you can either walk from town or ask your hotel staff what public bus to take. If you are visiting the Curi-Cancha Reserve, it’s very easy to walk to from there.

It was a beautiful day and I prefer to see wildlife in the wild, but I took a chance and went inside the Bat Jungle. It was worth it.

Inside, the exhibit reverses day and night so that the bats are active during our day. After a minute or so, your eyes adjust to the dimness. And then boom – everywhere you look bats! Not to worry, you and the bats are separated by a glass window.

I chose the self-guided tour as the next guided tour wasn’t scheduled to start for another hour.

A self-guided tour was sufficient. The staff gives an introduction to bats and then explains the exhibit. In addition to telling me how to use the flashlight (point the light at the bat’s body, not at their face so they are less likely to fly away), the staff also pointed out the baby bat nursing on its mother.

The 60-foot exhibit contains only the Monteverde species of bats. There are no Caribbean variety bats here as they require a different temperature range from the Monteverde bats.

The exhibit started over ten years ago when people asked the owner to “get these bats out of my house”. The bats live out their lives in the exhibit. There is a “senior room” for the older bats who are less active and need special care.

Timing-wise – you can stay as long as you’d like during the exhibit’s open hours.  I found an hour to be enough time.

Tidbits I learned about bats:

Combine your visit to the Bat Jungle with a guided morning tour at Curi Cancha Preserve followed by a night tour at the Monteverde Frog Pond.

For more adventure ideas in Costa Rica, check out our 2-week Costa Rica itinerary. Make an entire day Monteverde area is a must-stop on your Costa Rica trip.