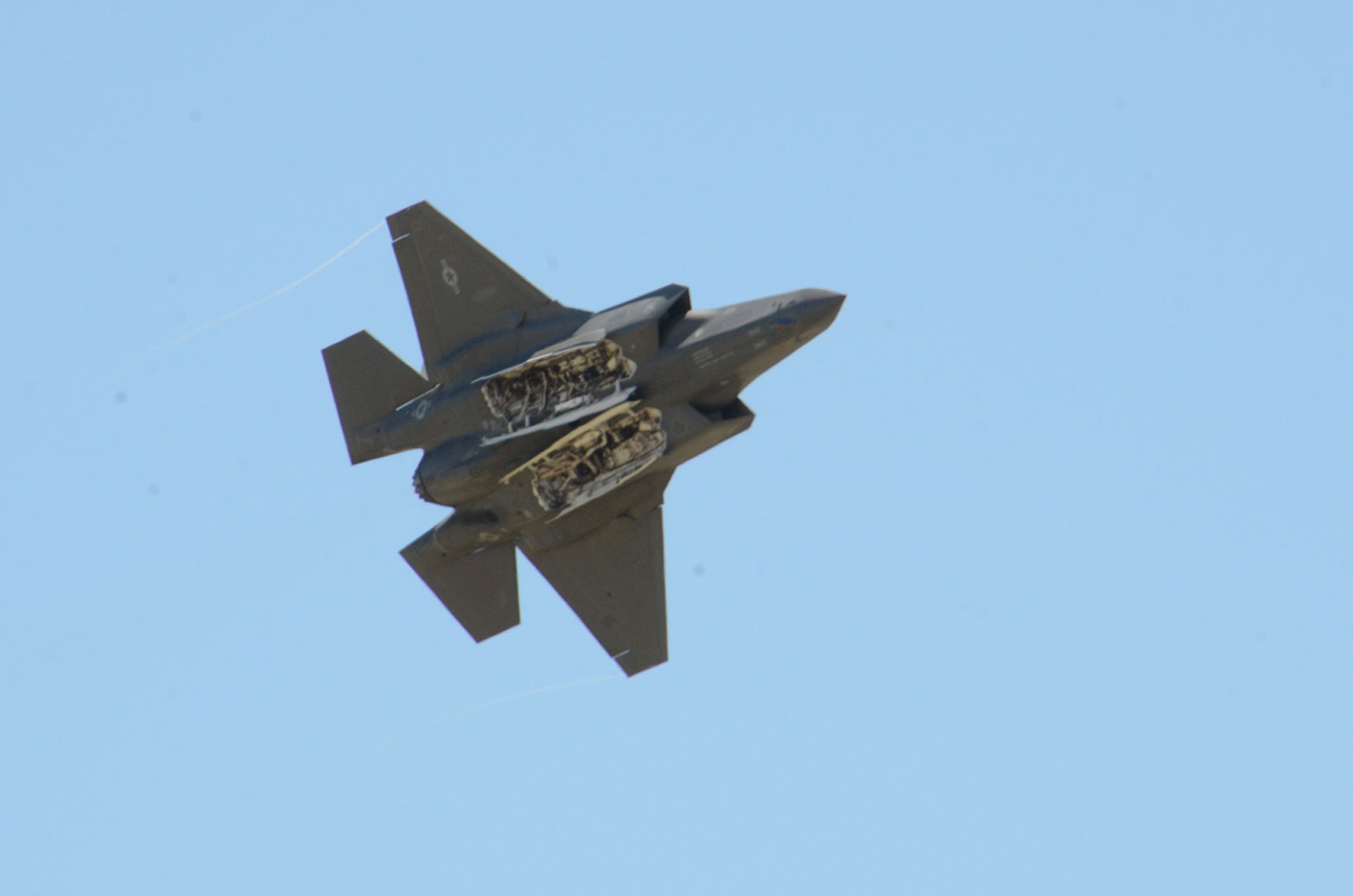 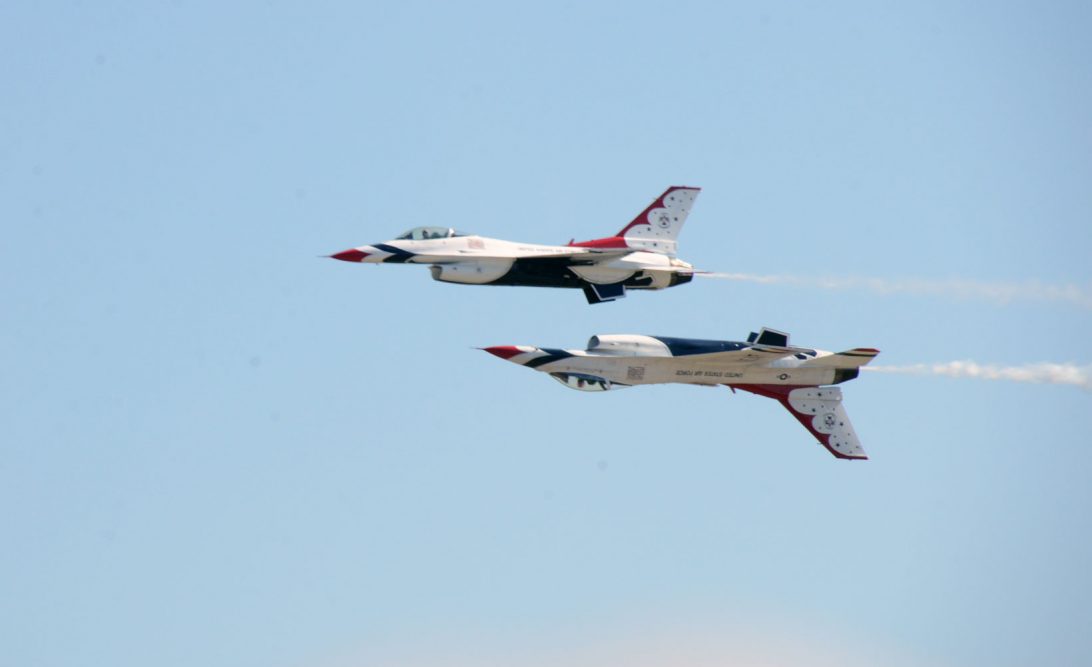 The scene?  100,000 people milling about the air tarmac at Seymour Johnson Air Force Base.

The reason? The bi-annual Wings Over Wayne air show.

Jet streams from the air show break up the clear blue sky.  The cloudless day means there are many lobster-red visitors.

The audience represents a cross-section of the American population – young, fit military members interspersed with not-as-fit spectators.  Miss Goldsboro 2019 roams through the crowd.

The retired service members are here in droves. Often seated in a folding chair, they are recognizable not only by their stature but also by the way the active service members gravitate to them.  Snippets of the conversation include the where and when for years of service and always involve gestures to the retiree’s hat or shirt.

Food stands scattered across the site offer your favorite fried food or a snow-cone.  Beer stands serve both Bud Light and craft beer from Wicked Weed for the same price — $5.  A well-organized event means none of the food or drink lines are long.

Planes parked around the tarmac give the public a close-up view. Wise folks sit underneath the wings for shade. A few enterprising service members climb atop the planes for a better vantage point.

Some of the planes are just for show – take your photo beside a KC-135.

Other planes are open for tours. The lines are bit long and slow-moving but if you have the patience you can walk through a Lockheed Martin C5 Super Galaxy or a Boeing E-3 Sentry AWACS. Or sit in the cockpit of a F-15E (aka “pet the jet”).  How often do you get that chance?

The airshow features all five military branches – the Airforce, the Army, the Coast Guard, the Marines, and the Navy.  Strolling through the grounds, each branch has a sponsored booth.

Want to see if you can hang with the elite? Then sign-up to participate in a mini-obstacle course and beat the military person’s best time.  Pull-up bars are at every booth if you want to show off your guns. And for the kids that can’t quite reach the bars, a military member lifts them up to the bar.

Bring ear protection – you’ll want it during some of the flybys.  Near the flight line, you will hear the announcer telling you the names of the planes, the maneuvers, and what direction to turn to see the not-yet-visible plane.

The upbeat music, predominantly country, is timed to the planes’ activities. Mumford & Sons song “I will wait for you” plays during the Thunderbirds maneuver creating a giant heart to honor the families of the deployed armed forces. Personally, I had Kenny Loggins’ song “Danger Zone” running through my head most of the day.

The show?  Five hours of orchestrated maneuvers, stunts, and flybys to show off the technology of the planes and the skill of the pilots and the support crew.  The show includes both military pilots and air show pilots such as Gene Soucy and Kevin Coleman.

Watch the propeller show plane loop in the air, fly nearly straight vertical, stall out the plane and float and twirl toward the ground.  Your heart will be in your throat until you see the puff of white smoke showing the engine DID restart as the plane zips off in a line parallel, not perpendicular, to the ground.

See a demonstration of a fighter jet as it tracks and outmaneuvers a prop plane.

Watch the Army’s Black Daggers (parachute team) head up in a C17 accompanied by Warthog (simulated bombers) and F16s (shooting off flares). The announcer told you to watch for the parachutes as the special operations team jumped out of the airplane.  Even so, the team appears out the sky like magic…their drop plane is well past them before you see bodies floating down from the sky. Keep an eye out on the ground – in 15 minutes or so those same paratroopers will be walking through the crowd carrying their rucksacks.

The refueling jet demonstrates an in-flight refueling of the fighter jet.

The Air Force Thunderbirds are the grand finale of the day. Watch out for the sneaky F-16 fighting falcons. Four jets distract you while another one zooms in with a blur and a sound that has you jumping out of your skin.

The Wings Over Wayne air show is a fantastic way to spend a day with family.  If you want to make a weekend out of it, consider camping at nearby Bright Star Farms and day hiking at Croatan National Forest.