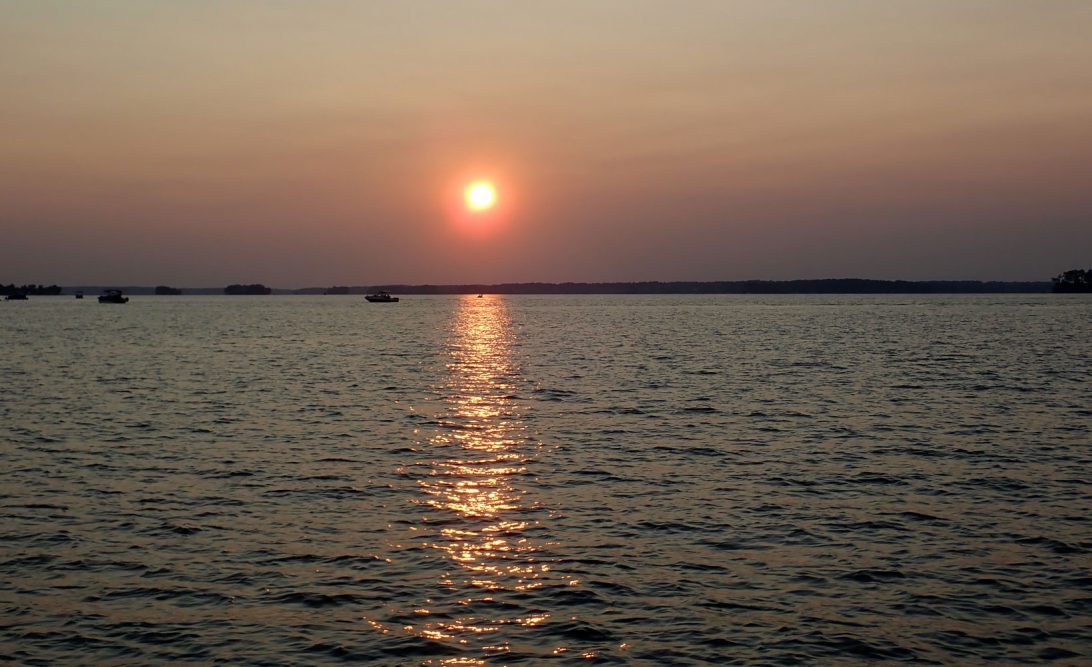 Heeding the advice from the captain, I crane my neck to gaze at the mass of purple martins swirling and diving above me.  The boat is anchored near Bomb Island in Lake Murray, South Carolina. This is the perfect spot to watch a gazillion-and-one swallows dance in the sky before they settle into the trees for the night.

Purple martins are members of the swallow family.  They do not land to eat or drink. The technical term for that behavior is ‘aerial insectivores’. They catch their insect meals mid-air. To drink, they swoop towards the lake and scoop water as they continue to fly.  To bathe, they belly-flop.

The purple martin migration from North America to South America happens every year during the late summer.  Before beginning their individual migration, the purple martins build up their endurance and rest. They gather in a large number to roost each evening.  This is what we’ve come to see.

The Lake Murray birds, except for the year 2014, have been roosting at Bomb Island for over 25 years.  The island is an ideal spot. In the middle of the lake, it is near impossible for land-based predators to swim to the island.  With a wide-open sky around the roost, the purple martins can spot and chase off aerial predators. The martins may be small in size, but the sheer number of them is usually effective at deterring flying predators.

Their 2014 disappearance is allegedly due to someone flying a drone into the flock several days in a row.  Unable to scare off that ‘predator’, the birds disappeared one summer.

Wingard’s Market runs a Purple Martin boat tour to view the birds roost for the night.  The tour size, limited to six passengers, is both personal and friendly. It includes an educative narrative by Captain Zach Steinhauser.  In addition to his background in biology and his in-depth knowledge of purple martins, his sense of humor enables him to deliver unexpected deadpan jokes.

The tour boat launches from Jakes Landing Marina on the south-eastern side of Lake Murray.  The marina is not fancy – the potholes in the rutted parking lot are large enough to rattle your teeth.  Expect to pay a nominal fee to the marina for the privilege of using the parking lot.

No worries if you don’t have other friends to join you.  I was on a boat with a group of five other ladies. They adopted me as one of their own.  Binoculars and seats on the boat were freely shared. We swapped stories and I was included in their good-natured ribbing.

On the way out of the marina, we stop to view bird condos in the yards of the waterfront human houses.  East of the Rockies, the purple martins are dependent on man-made housing.

Their nesting habit is to use pre-existing cavities.  Years ago, people began putting up empty gourds for the birds to nest in. Over time, natural cavities have disappeared.  Thus, the birds have evolved to rely on man-made housing.

The birds return to the same place every year to breed.  When there is loss of habitat, they don’t have a place to nest.  Thus the human-provided nests (6 or more nests as they are social) are important.  The birds eat a large number of insects so they are good yard-mates.

Captain Zach spots a fledgling osprey and stops to explain its behavior.  He says the parents have raised the baby bird and have now moved on. But the young bird is hanging around the nest hoping its parents come back to feed and entertain it.  One woman quips “Oh, just like young adults these days”.

Arriving at Bomb Island, we get a history of the island and the lake.

In the 1940s, B-25 pilots used the island to practice their bomb drops — thus the name Bomb Island.   The Department of Natural Resources controls the island. Landing on the island is by special permit only.  Given the amount of guano on the island, it wouldn’t be on my top ten list of places for a picnic lunch anyway.

The man-made lake was first filled in 1930 after the Saluda Dam was built to provide hydroelectric power to the surrounding area.  When the dam was finished, existing settlements were flooded. These underwater towns and infrastructures (such as Wyse’s Ferry Bridge) are now a sight-seeing venue for scuba divers.

Captain Zach stops mid-sentence in the history lecture and grabs his binoculars.  “We are taking a detour. We’ll come back to see the purple martins. The won’t arrive for another 15 minutes anyway”.  I don’t why we are detouring, but it must be REALLY good if the life-long bird guy is excited.

We pull up near a trio of birds.  They are common loons. The captain says more than once “They shouldn’t be here this time of year” and “Why didn’t I bring my camera?”.  Secretly, I’m glad he forgot his camera. Every photographer knows the good stuff appears only when you don’t have your camera.

He plays loon sounds on his phone and the birds begin to talk back.  I wonder what his phone promised them – airfare for their migration?

Returning to the island area, we join 15 other anchored boats.  The sunset is painting the sky pink. The lake is calm. The air is warm enough that a windbreaker isn’t needed.

A long string of birds begins flying towards the island.

“Look, it’s the purple martins!” one of us shouts.

Those are blackbirds. Blackbirds and cowbirds share the island with the purple martins.  The other birds figured out that predators can’t sneak up on ½ million martins so the island is their safe zone too.  How’s that for evolutionary coolness?

Suddenly the purple martins are everywhere.  Where did they come from? They do not fly in a coordinated fashion or group but there are so many of them they seem to.

The purple martin roosting event lasts for approximately 20 minutes.  When they are ready to nest down for the night, they ‘drop in’ or swoop into the trees.   When they take flight in the morning, their mass will be significant enough to appear on regional Doppler radar reports as a weather event.

The boat returns to the dock as the last of the sunlight disappears.  The purple martin tour is a success and I have the blurry video of swooping black dots to prove it.