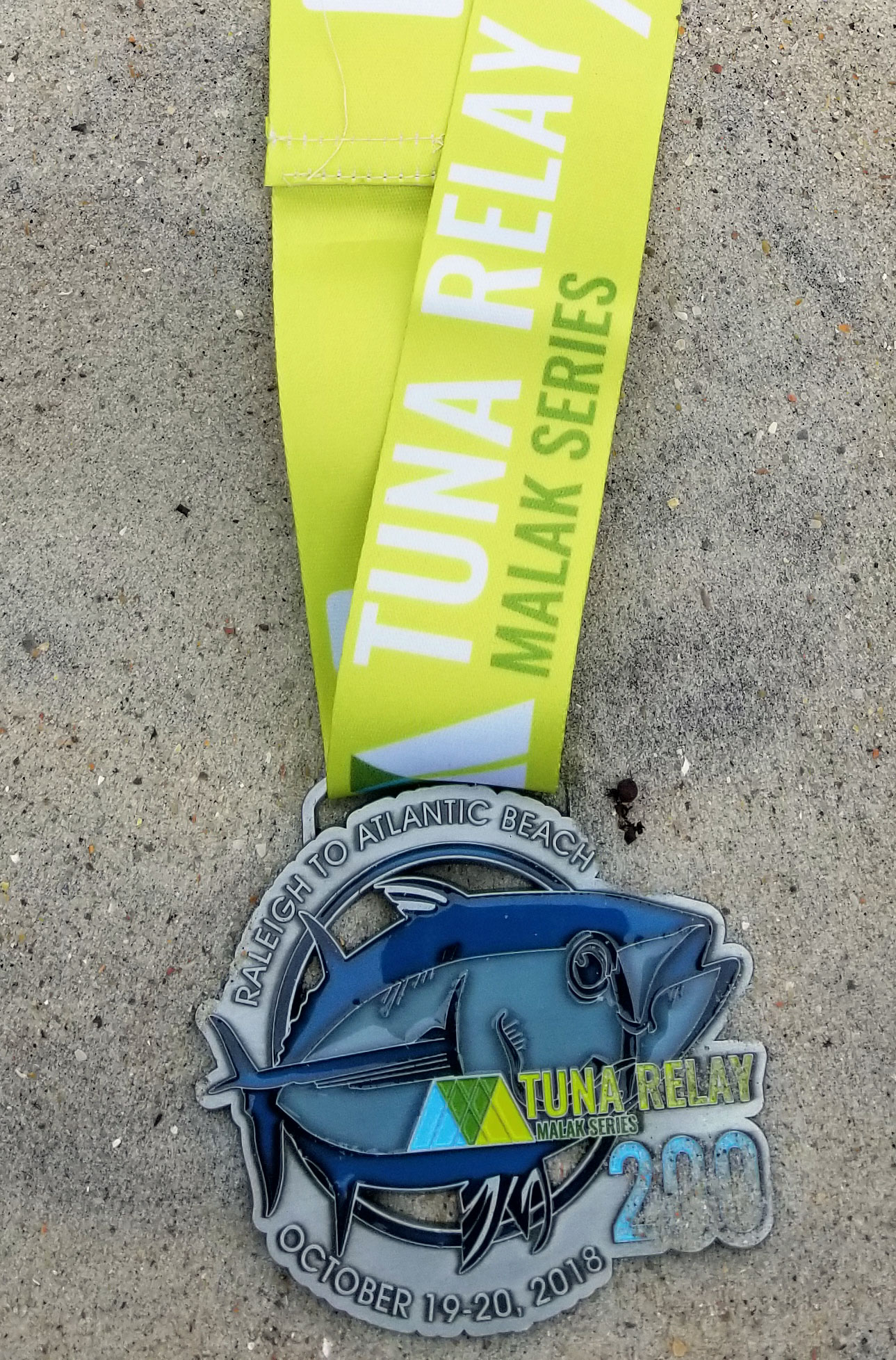 What is the TunaRun200? The technical description – a 200 mile relay run race from Garner to Atlantic Beach NC. Twelve runners and two vans. Each runner runs three of the thirty-six legs. A leg could be a distance anywhere between two and ten miles. Reach the finish line in under 36 hours.

Nope… the technical description does not do it justice.

An event of physical evolution, mental growth, and blisters.  Well, that description is a little closer to reality.

Yep, that about sums it up. Most overnight relay races are likely similar but this is the behind the scenes story of the TunaRun200 Relay race.

The technical description of race preparation – recruit runners, register the team,  rent vans, coordinate van supplies.   The reality is so much more.

The easy part? Getting ten to twelve of your running buddies to say “Yes! I’m in.”   Everybody lies.

The challenge? Getting those same people to hand you $100 each to cover the cost of their registration fee.

The long haul? Finding replacement bodies when folks drop out before the race due to conflicts, injuries, or a better offer.

What exactly constitutes a better offer? You’ve been given the opportunity to pay money to run three times over the course of 36 hours. For a total of 15-20 miles per runner. While sleep-deprived. Maybe in the blistering heat, maybe in the rain. Definitely in the dead of night when every rustle sounds like a 100 pound Cujo.  Or a zombie. Sometimes the rustles sound like a zombie. Note to self – do not watch Walking Dead next season.

Depending on your team’s average mile pace, your first runner will take off from the starting gate as early as 5 a.m or as late as noon on Friday. Your team has zero experience with starting the race after sunrise. A clear indicator you aren’t in it to win it.

The bonus of an early start? Another leg or two of running in the dark. Through the country. Where a cloudless night shows you a bazillion stars that you never see in your ordinary light-polluted life. If you are lucky, the race will coincide with a meteor shower and a limited moon – guaranteeing you have a crick in your neck from looking up. Maybe you are the lucky one who is running just as the sun is peeking over the horizon. Perhaps you are extra fortunate and get the bonus run when the morning mist is rising off the lake as the sun starts to touch the surface.

During leg #1, you cycle through your van of runners tossing each runner out for their run. You have six runners in each van if you are a full team, less if you unlucky.

There will be nervous chatter from the newbies. Many have never run in the dark. Some have never run ‘alone’. You explain ‘alone’ isn’t really alone on this race. Other runners will be visible in the distance. Inevitably, you either ‘kill’ (pass a runner) or become ‘kill’ (get passed by another runner). Many other team vans will pass by – hooting and hollering and ringing a cowbell. But, if you are a neophyte and you normally have a running companion in lockstep with you, you won’t believe ‘alone doesn’t mean alone’ until after you finish your first leg.

Maybe your van drops a runner at the start of their leg, wishes them well, and mosies on up to end of the leg to wait on them. Perhaps the runner asks you to implement the ‘creeper’ rule and your van drives ahead some distance (1/2 a mile, 1 mile, 3 miles) to cheer the runner on, hand them water, or take the gear they have stripped off.

The only rule of tuna? Everybody lies.

Everyone claims a slower pace on the race timing sheet then they actually run. Claims of soft injuries, ‘having an off-season’, and stomach distress fill the van. “I never run on an empty stomach.” “I always run on an empty stomach.” “I’m a morning runner.” “I’m a night runner.” “I need more (less) coffee to do this.” These phrases will be repeated many times over the course of 36 hours. Everybody lies.

Your van makes it through it’s first six legs. You celebrate by the slapping the slap bracelet on the first runner in van #2 and wish them luck. You snicker knowing their chatter is the same and their lies are just as colorful.

Your van is now off-duty for the next few hours. You drive off-course to find real food, caffeine, and flush toilets. The van is filled with chatter of how everyone could have done better ‘if’, how that wasn’t as bad as anticipated, how a stretching program might be a good idea next year.

Word of the ‘really good diner’ nearby had filtered through the crowd at the van exchange like a whisper on the wind. You find that rural diner and invade like locusts. You wonder if you hadn’t just run 3 to 9 miles would you still rate it as 5 star diner? The locals are welcoming at the diner. Yet the food arrives so quickly, you think they may want the runners to take their nervous chatter elsewhere.

After scarfing the food down, your runners pile into van.  The van moves on down the road to the next van swap spot. The sooner you arrive, the more nap time you have. You hope for good daytime sleeping weather. Not 90 degrees and humid, not raining, not mosquito infested. You are lucky this year with temperatures in the 70s and a clear sky. A bit of cloud cover might have helped the sleeping bald fellow whose scalp turned tomato red.  Perhaps he should have been nicer to his teammates and they would have put a hat over his head while he was passed out.

Some teammates claim that they are not nappers, so you encourage them to just lay flat and it will help in the next turn. Conserve your energy. Act like a Great Dane.  Don’t stand if you can sit.  Don’t sit if you can lie down.

Everyone finds their little sliver of space – some in the van, some laid out in the grass beside the graveyard. The irony is not lost on you.

Phones light up with  multiple texts from van #2 giving an estimated time of arrival. You rally your van into action for the next on-duty cycle. The first two runners for leg #2 don their running gear. Everyone else resumes their nervous chatter. Van #2 arrives. While waiting for their final runner,  you compare notes of how everyone is feeling. Everybody lies.

You discuss van decorations and brag about what swag you got from other teams. Suddenly, the racejoy app on eight phones starts chirping – runner #6 from van #2 is within 150 meters. You cluster near the exchange zone to cheer for the incoming runner and to amp up the outgoing runner.

This is the time during the race when there is comfort in knowing what to expect so silliness ensues. The slap bracelet is exchanged with flair.  Van #2 bids you adieu and heads off to find food and a nap. Van #1 resumes its duties.

The pace is kept above our anticipated team average of 10:50 minutes per mile. Runners push themselves to their limit to get ‘kills’, to beat their stated time, to get back in the van as quickly as possible.

Yours is a friendly team without a competitive bone in its body. Except when you start running and that little voice in your head screams “DO NOT BE THE SLOW ONE IN THE VAN!”. The hand-offs are a little more ‘go go go’. Every runner finishes their second leg with a statement like “I just need a minute to cool off — not puke — get my bearings”.

Some of your runners have their very first night run. The runners who insisted they never run alone at night and need van support, sprint off yelling “Leave me. I’m good”. Everybody lies.

Being ahead of schedule, you send van #2 a flurry of texts to get ready as you are coming in an early to the swap spot. You hand-off to van #2 – both the slap bracelet and your super bright blinky vest as their next six runs will be in the dark.

Van #1 hustles off to the next van swap spot. There are statements made that coffee will be needed before folks can run again. As an experienced relay runner, you state there are no guarantees of coffee prior to our next turn but there is Dr. Pepper in the van. You are informed that is not a substitute for coffee.  Everybody lies.

Half the runners stay in the van and try to sleep through the snoring and the rustling. Half the runners grab a sleeping bag and lay out under the bright spot lights. Three hours later, you awake to a message from van #2. They will be arriving in 25 minutes.

You shake awake your first runner. He mutters “what?!”. “What??” Uh, nothing, just thought we’d see if you were actually sleeping. You tell him he has to run his final leg – starting in 23 minutes. A resounding four-letter word (rhymes with truck) is exclaimed. You sigh and leave him to his misery as you proceed to the van.

The van dwellers groan when you open the door. You state that you’’ll get runner #1 on the road and then everyone can get coffee from the gas station 1/2 mile away. A runner promptly exclaims “I don’t give a *truck* about coffee. I feel like crud”. You sigh and decide the word of the day is *truck*. Just roll with it.

Van #2 arrives, bleary-eyed and eager for sleep. The van captains agree ‘slow-runner’ protocol is likely to be implemented for everyone’s leg #3. This is where you have two runners on the course at one time because the average team pace is about to become slower than the required 10 minute mile pace. Every runner is now running on empty. Dead legs. Upset bellies. Nothing but a cat-nap or two in the last 30 hours.

Van #1 goes back on duty. Every runner struggles through leg #3. Blisters have appeared overnight. Muscles are knotted.  Cramps creep in. Walking, rather than running, is entirely acceptable. Crawling becomes a viable option.

But the nifty part? This is where the camaraderie kicks into high gear, both inner and inter-team. You ‘creep’ your runners to give them water and cheers. You encourage other teams runners. Another team “companion runs” your runner up the big hill. Is this speedy? Not so much. Is this a demonstration of the spirit of running? In spades.  Many of the locals smile and wave as they drive by, some even yell encouragement.

Your van’s third turn ends at a church.  The church folks welcome you in to change clothes, nap and eat.  You wolf down a stack of pancakes while saying thanks to every volunteer in sight.

The racejoy app begins chirping that your final runner is within 150 meters. As a team, you gather 25 yards from the finish line and run, walk, and stumble across the finish line as a semi-cohesive group.

The team high-fives. You congratulate everyone on a job well done. You express gratitude for their physical abilities and their mental can-do attitudes. The team, with their finisher medals, poses on the beach for the traditional photo. Everyone then scatters to snag their tuna plate and use their beer tickets.